The art of the quarantine era. Part 2. Three-dimensionality

Today we will talk about sculpture, how it changes, and what awaits it next. At the mention of the concept of sculpture, 99% of the world’s population who have an idea of ​​the history of art, something white and marble appears in their memory. Something like Apollo Belvedere, Venus de Milo, and David Michelangelo.

Sculpture as a vague concept.

There have been times in history when sculpture was a much more important art form than painting. And all because the sculpture was a single whole with architecture. But times have changed, the buyers of works of art were not pharaohs, temples, rulers, or popes. The social base of buyers expanded, and the architectural spaces of new consumers of voluminous art objects became smaller and smaller, until, as, for example, in the Soviet Union, they narrowed down to a room in a communal apartment or a small apartment. And the sculpture of this time shrank from space, turning into a small porcelain sculpture, charming, but so far from the stunning effect of Gattamelata or Nika of Samothrace. The last great sculptor to shock humanity was possibly Auguste Rodin. Today the boundaries of sculpture are completely blurred. This is noted by art critics and curators. Since the time of Maurice Duchamp, it’s generally difficult to understand what is called sculpture. Because his “Fountain” is actually a sculpture too. Numerous installations and dynamic structures can be called sculpture – in short, everything that galleries, biennials, triennials, and urban spaces represent so generously today. You won’t surprise anyone for a long time. https://www.youtube.com/watch?v=xhlnH8n0ZHw

The expectation from sculpture for something more than just shocking or flashy is gradually returning to society. Sculpture, like painting, needs detail, craftsmanship, and ultimately beauty, not just design. In the light of all that is happening, in the general absence of formalization of the attitude towards sculpture in contemporary art, digital sculpture, embodied in both virtual and real space, can and should take serious positions. The museum has already introduced viewers to the work of Chad Knight, who places his wonderful works in virtual spaces that completely imitate reality. Given that most of us will not be able to see the great statues with our own eyes and will be content with their images on the screen, the sculpture of Chad Knight looks as authentic as King and Queen Henry Moore in Glenkiln Park in Scotland.

The virtual sculpture is becoming especially popular in light of this year’s events. The virtual space is definitely epidemiologically safe. The sculptors who are most sensitive to success are well aware of this. It was no coincidence that Jeff Koons gave the go-ahead for a virtual installation of his balloon dog sculpture in Central Park. New York artists joined the game and messed up the sculpture in Photoshop.

The virtual sculpture will soon fit into real life. For example, it can be placed as a real object on Google maps, included in the permanent exhibition of virtual versions of real museums, creating a different interpretation of cities or exhibitions, as was already done with Ken’s virtual sculpture. Kelleher.

Digital sculpture and the new old language of art

Each gallery, each museum is gradually developing a certain individual attitude to what is presented within its walls. The general concept of our museum is to give a fairly broad idea of ​​the processes taking place in the field of digital art, but we also have our own preferences. First, the museum believes that the time of so-called contemporary art is coming to an end. We hope to devote a separate study to this. In the meantime, for example, contemporary art has exhausted its tasks. Of course, many of his directions will remain, because in art practically nothing disappears without a trace and continues to exist in parallel with new phenomena. But the general trend is changing. In a world where so many things are turned inside out, it’s time to assemble the disassembled person. His inner world, his body, his outer shell. Art today is working on the search for complete images. Yes, ambiguous, yes, complex, but a whole, not torn apart into chaotically disparate parts. This is how Farzad Maleki works. His sculptural images are powerful, brutal, and dedicated to a person in a state of exertion of all forces, at the moment of overcoming oneself, at the moment of intense struggle, at the moment of self-giving.

He continues to work on the visualization of famous works of painters and graphic artists, but, unfortunately, not as intensively as before. Very sorry. This is a unique phenomenon in the world of sculpture.

What the viewer wants

New audiences were not spoiled by academism or realism. They grew up in bright posters, deformed bodies, rough geometry. Everything that was so fresh, shocking, revealing the essence of the phenomena, has turned into a simple canon that is easier to repeat easily, combining, for example, incongruous. Leaking buckets, fuel barrels, plastic mannequins – all this, of course, is shocking, but the first impression of Duchamp’s urinal was able to interrupt only Manzoni, Damien Hirst, and Gunther von Hagens. The new language does not like either directness, or outrageousness, or rudeness. But he returns to art its important component – the skill of execution. It is the elegance of the decor, the thoroughness in the details, the beauty of the form, testifying not only to the talent, deep inner content but also to the skill of the artist, that have become the language of virtual sculpture that the new viewer wants to see. This is how Rori Bjorkman works subtly and precisely. Now Rory creates characters and scenes for his author’s project.

It’s naive to think that a digital sculptor doesn’t need professional skills. Yes, physically and materially, the process of creating a virtual sculpture is hundreds of times easier and cheaper than working with the material, but from the point of view of intellectual costs, the work on creating volumetric objects is no less. Perhaps in some ways, this process is even more difficult, because you cannot touch what you are doing with your hands.

The broadest social base on which digital art is oriented in one way or another influences the choice of aesthetic solutions. You can talk a lot about the artist’s ability to see hidden beauty, to reveal the beauty in the ordinary, but there are unconditional things that appeal to everyone, both aesthetes and the inexperienced. There are certain archetypes that unmistakably affect everyone – sparkling glass, the shine of gold, smoothness of mirrored surfaces of metal, the ornament of the Baroque and Art Nouveau epochs – there are hardly any people who do not like it, even if they themselves do not admit it to themselves. This is what I would call unconditional beauty, outside of social belonging, outside of taste preferences, what is written in the subcortex. And in this area, the unsurpassed Billellis continues to reign. His brilliant, elegant reflections on the fragility of all living things and the eternity that awaits us fascinate all new fans.

Naturalism or the pursuit of authenticity?

The artists immediately tried to imitate real sculpture. Not because they were eager to demonstrate their skills. No, they had other tasks. The Egyptians sought to create such a sculpture in which it is enough to breathe in the soul for the body to come to life again in that afterlife, which is Eternity. The ancient Greeks did their best to create the perfect human god. The life of the gods in Greece did not take place somewhere behind the clouds. The gods actively interfered in human affairs, argued, now and then appeared before mortals, entered into negotiations with them, that is, they were here and now. But, of course, they were more perfect than mortals. Hence – the ideal proportions of antique statues. But, since these gods were perceived quite materially, the statues were painted, giving them even greater (according to the ancient Greeks) expressiveness and realism. They were painted in colors close to natural, or covered with gold, which symbolized immortality and the presence of another world among all peoples. It all looked something like this. 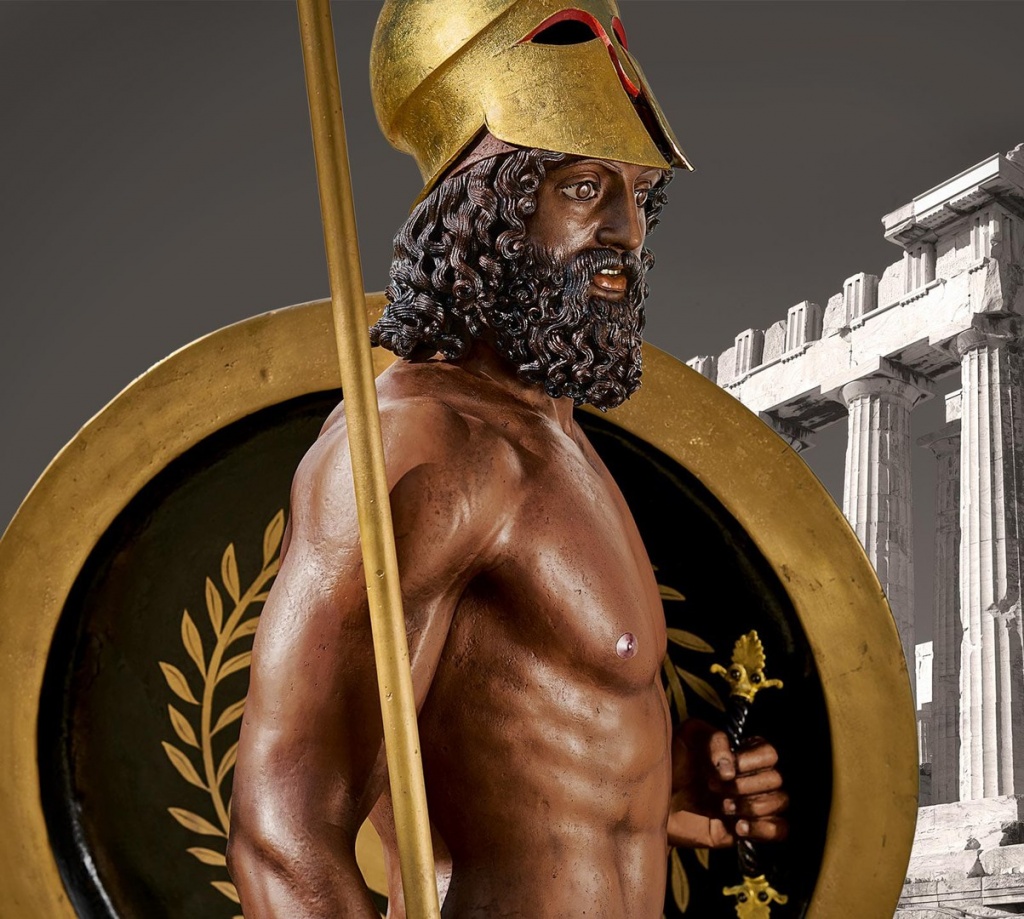 In the Middle Ages, it was customary to paint church sculptures, especially the wooden ones. In the Catholic cathedrals of the Renaissance, there was widespread enthusiasm among donors (donors of the church) to install their own wax images in churches. Thus, the Church thanked the generous donors. Gradually, the figures became larger and more realistic, grew to their full height, and some even mounted horses. So that they do not clutter up space, they began to hang them under the ceiling. The spectacle was – no Hirst can be repeated. So there is nothing new under the moon. And today in the exhibition space you can see the works of sculptors playing with hyperrealism. Such is, for example, Martin Honert with the world of giants or dwarfs. 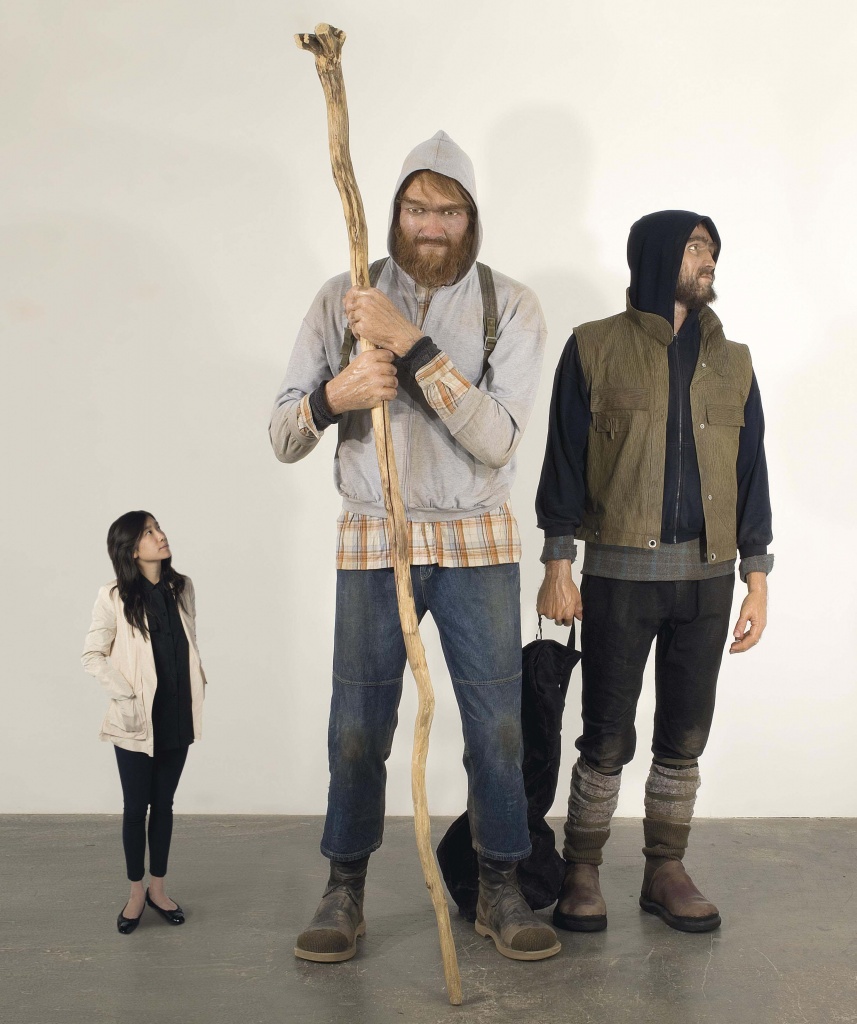 So it’s no surprise that digital sculptors go beyond form and detail the texture of human skin, hair, eyes, clothing fabric, and other details that make the image as vivid as possible with a wide range of tools. This is a very popular direction, especially since it is in demand in the gaming industry and film production. The museum houses renowned masters of hyperrealistic portraiture. This is Ian Sprigs. Farzad Maleki also tries himself in this genre. Yang seeks new expressive techniques to convey life more fully in his amazingly realistic sculpture. He cares about how the public treats “digital people”, how he calls his characters. Having created a portrait of his mother, he first exhibited it anonymously so that the emotional component does not interfere with pure perception.

In Heidi’s portrait, he tries new lighting that emphasizes the tender beauty of a young woman.

And this is how the stages of work before and after look like in a portrait of a friend of Christopher Nichols.

Digital painting gives sculptors more freedom. It seems to me that they have not yet fully realized this and are not making full use of it. Most of all, they experiment with artists who work on the verge of surrealism, combining it with elements of other styles. Gregoire Meyer’s surreal imagery captures the elegance of Art Nouveau lines and the glamor of Art Deco splendor.

It seemed to me that those who work with volumes have more easily survived the apocalyptic events of this year. Perhaps precisely because they were dealing with space, albeit virtual. After all, it was freedom of movement in space that we lacked so much in these strange months. The quarantine did not affect the work of Auguste Lefou in any way. Perhaps this only made him even more attentive to the fragility of our being. The artist reacted sensitively in his works to the shock of humanity, which realized the ephemerality of its security.

Reflections on what is happening in the world manifest themselves in different ways. The artist differs from ordinary mortals in that he feels the world with his body. I would greatly revise the cliché about a certain extraordinary spirituality of people who create visual arts. Maybe such people are words. But, I am convinced, an artist, graphic artist, or sculptor feels the world bodily, at the level of physical experience, at the level of muscle tension. This is very strongly felt in the work of Tamara Zinovieva. This year she has worked a lot with traditional materials, using non-standard author’s techniques of destructive plastic. And in digital, the artist responded to the painful state of swaddling, to the forcible immersion of the whole world in a state of infantile impotence with an airy structure, similar to a dream, transparent and light, calling inside the detachment of being.